Welcome to THE place for your new best student accommodation in Liverpool ... a super popular, Insta-worthy city for students, known for its buzzy vibe and endless culture.

Famous for The Beatles and Liverpool F.C, there are lots to see and do if you choose to live and study in this amazing city, whether it be visiting the trophy room, or doing a search for the Superlambananas. Whether you fancy shared vibes in student rooms or private studios with en suite rooms, our great properties are close to uni, transport links, all the best shops and bars, and rent is all bills included.

Get ready to find your best accommodation close to The University of Liverpool and Liverpool John Moores University, and centre yourself oozing with music and good vibes. Every day is an adventure and you’ll never be short of places to explore as a student. The best part? We've made sure your student accommodation is never too far from all the best areas, so you can really live your best student life. Liverpool is so friendly, that it's easy to make new friends and enjoy the private kitchen and living areas and other communal spaces in your student accommodation for days you're staying in.

Why not head to The Baltic Triangle for some mouth-watering halloumi fries, or grab a glass of vino at The Peaky Blinders bar? Whatever your plans are with your student pals, get ready for the best experience leaving, you with a big smile on your face the whole time! What more could you want, right?

Home to over 70,000 students and is consistently ranked as one of the best cities for student accommodation in the UK, with a range of courses available over the different universities and colleges and easy to get to with public transport.

One advantage our student accommodation in Liverpool has over halls located on the outskirts of the city centre is that its perfectly located, being just a stone’s throw away from academic buildings and popular hangouts.

The University of Liverpool 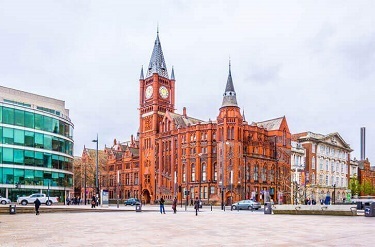 The University of Liverpool is consistently ranked within the top 200 universities in the world and is a leading research university (around 8,000 foreign students currently study at the university).

It has established a university near Shanghai, as well as a campus in London. The University of Liverpool is the original ‘red brick’ institution site and was founded in 1881, and attracts some of the brightest students from around the globe, enhancing student life here.

Our Liverpool student accommodation properties is within walking distance of all main institution buildings with many room and studio options.

Liverpool John Moores University (LJMU) is known as a modern civic university that is a pioneer in academic excellence, creativity, and scholarship.

The John Moores University students’ union at holds over 100 groups and functions throughout the year, and is centrally located on campus for easy reach. LJMU was the first institution to offer a BSc (Honours) degree in sports science in 1975. Our student accommodation property in Liverpool is in the perfect location for LJMU students.

LIPA (Liverpool Institute for Performing Arts) is an institute that focuses on the education and training for students interested in the performing arts. Degrees are validated by LJMU. It continues to be at the vanguard of the sector, with investment in virtual reality, and motion capture technology, as well as regular immersive digital and live performances.

Liverpool Hope University is located outside of the city centre, but our Liverpool student accommodation is within easy reach of good transport links out to Hope. It has one of the widest varieties of degree choices on offer in the country, from the arts, humanities, and social sciences, to education and science degrees. It is also consistently within the top-ranked universities in the country for student life satisfaction.

There is so much going on here, as the food scene has developed over the last few years (check out our article on the best places to eat in Liverpool and the best burgers in Liverpool). Whether you wish to sample the delights of the oldest Chinatown in Europe, enjoy a night out at The Baltic Market, or you’re just looking for a cheap feed at the end of a hard week at University. 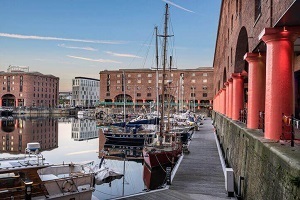 If you are after food on the run, the Guild of Students has all you need as a break from the day from your Liverpool student accommodation and studies. For more budget food options you can find places such as Big Bowl Noodle on Berry Street (opposite the iconic Bombed Out Church – St Luke’s) for a bowl of hearty noodles to suit any palate.

Another long-standing favourite is the vegetarian café The Egg on Newington – providing a range of meals and snacks for a very good price.

Bold Street has become a beating heart of cuisine and is home to so many restaurants of many varied cuisines that it is a favourite for tourists from all over and isn’t far from our Liverpool student accommodation.

The quality is outrageous, from the wonderful breakfasts in Café Tabac, through the brilliant Mowgli for Indian street food and The Italian Club(s) for perfect pasta and pizza, to Nolita Cantina for meaty escapades and Bakchich for perfect Lebanese food at a good price.

Students all know the value of a good hearty breakfast (especially if you’ve been out the night before!). Don’t fancy cooking in your Liverpool student accommodation? Well, there’s also a great breakfast and coffee scene!

Liverpool has a thriving party scene, with clubs and bars that really have something for all tastes for you and your group of friends. There are a few different areas of town that have lively clubs, bars, and pubs to enjoy, so there’ never a dull weekend when you’re staying at our student accommodation in Liverpool.

If you are into a traditional pub crawl the Georgian Quarter is full of old-fashioned boozers where you can make friends with locals that will last a lifetime. Pubs such as The Grapes on Roscoe Street in the Georgian Quarter are a haunt of local characters, musicians, artists, students, and locals alike (LIPA is located on the same street).

Not far from our student accommodation in Liverpool is Concert Square, a great place to be most nights of the week, with bars and clubs surrounding an open square, such as Modo, Fusion, and Level. Set up the pool table, enjoy a beverage and then dance the night away before returning to your Liverpool student accommodation. There is a party every night here.

Home of The Beatles 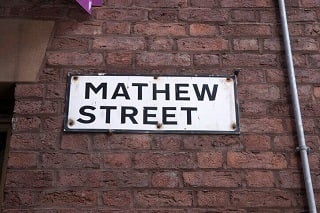 Mathew Street is the birthplace of The Beatles and home to The Cavern Club where they famously played shows in the early days. It is a tourist mecca these days of course, and the whole street is full of bars, live music, and partying until the early hours each and every day. You only need to Google Mathew Street and you’ll see how much of a party hub it really is.

The Albert Dock is a stunning riverside location, utilising classic listed buildings to house wonderful bars and restaurants for a classy night out on the town.

In the last few years, the Baltic Triangle has continued to develop at a rate of knots, culminating in the triumphant Baltic Market, which is home to street food stalls but also a bar and the latest news to many a live event.

If you are on the lookout for culture to discover as part of your student experience, our Liverpool student accommodation places you in the heart of the action, unlike many student houses that are on the outskirts of the fun.

There is always a big cultural event happening it seems, and for history generally, there is something on every corner to support your interest. UNESCO has, in fact, granted several sections of Liverpool World Heritage Status, including the waterfront and the three graces that sit alongside the River Mersey.

It was also the first English city to be awarded European Capital of Culture in 2008, a year that was full of vibrancy and spectacular celebrations that left nothing settled. It was a time that drove Liverpool forward and it is certainly an open and attractive atmosphere now due to it.

From Football to Horse Racing

Sporting occasions are key to life in the whole city, with the two big football teams in Everton and Liverpool fighting for supremacy on and off the pitch and dedicated public transport to matches. Then there’s the Grand National at Aintree every April providing a home for horse racing. It is an exciting time to be in the city that’s for sure, with a celebration that lasts for a full 5 days.

The waterfront is a spectacular area and you’ll also find at the Albert Dock the Tate Liverpool, which is home to countless modern art exhibitions, meaning that even if you’re low on cash there are plenty of amazing things you can do for free. 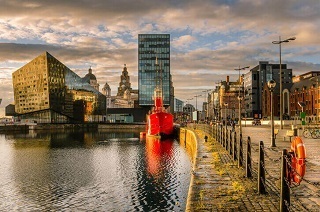 The Beatles Museum and Exhibition can also be found in this part of the city with halls full of nostalgia and music history. For clever and thought-provoking exhibitions, the stunning Bluecoat building and FACT (independent cinema and gallery space) provide access to artists all year-round.

Liverpool has also been awarded the status of World Capital City of Pop by the Guinness Book of World Records, as its position as a home to some of the biggest pop makers in history. Close to our student properties is Chinatown, a spectacular part of the city being the oldest Chinatown in Europe, with the largest Chinese Arch outside of China itself. Chinese New Year celebrations are truly awe-inspiring each year.

Our Liverpool student accommodation property provides you with the perfect location to join in. Just last year the Giant Spectacular came to the city for the 3rd time in a decade, with giant puppets roaming the streets as part of an elaborate story over a weekend. It brought in hundreds of thousands of people and was a storming success.

Events All Through the Year

Every year though, there are staple parts of the Liverpool calendar involving music, including Liverpool International Music Festival (LIMF), which utilises the beauty of Sefton Park to stage big concerts, as well as Liverpool Sound City, located in various venues around the city centre, and Africa Oye, promoting African music, art, and cuisine in Sefton Park. The Rock ‘n’ Roll Marathon combines both music and sport in a spectacular way. For the latest news on gigs you can visit their websites.

I am very glad to live here, the staff is very friendly and nice, the accommodation is very comfortable.
Selina R, Resident
Windsor Court, Liverpool

This is my favourite place to live and it feels just like home. HIGHLY RECOMMEND.
Tara McBride, Resident
St Andrew's Gardens, Liverpool

I have felt at home here and would highly recommend this accommodation to students living in Liverpool, with the transport links being excellent.
Karran Panesar, Resident
St Andrew's Gardens, Liverpool

There has been amazing support throughout Covid and I have never met such friendly staff that get so involved in maintaining a happy and great community. Completely amazed by the effort the staff put in, thank you.
Cait Thornton, Resident
St Andrew's Gardens, Liverpool

Really safe and secure and great location as it in the centre of town. Staff are really helpful and neighbours are friendly. Would recommend.
Shay Sully, Resident
St Andrew's Gardens, Liverpool

Top 6 All You Can Eat Restaurants In Liverpool

Best 8 Places to Eat in St Andrews for Students

10 Best Gyms In Liverpool for Students

Best Breakfasts In Liverpool: Where To Find Them

The 5 Best Places to Eat in Liverpool City Centre