Here at Homes for Students, members of our team celebrated alongside the LGBTQI+ community at our first company Pride event in the city of Liverpool. This year was extra special as it has been 50 years since the first Pride protest in London in 1972, and it was the first time in three years that the event could take place in person due to the pandemic!

As a company, we understand the importance of supporting not only our LGBTQI+ students but our colleagues too. Which is why members of our team marched in support of the community and promoted acceptance and equality for all.

The colourful event on Saturday, 30 July was attended by over 12,000 people which is simply amazing. We’re so happy that our team had a great time, and we hope that everyone else did too! 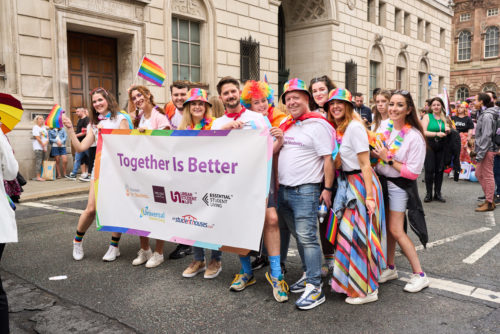 Pride celebrates gender and sexual diversity with events and festivals that take place annually not only across the UK, but across the world too. The first Pride event in the UK was held in London in 1972 as we mentioned earlier.

It was setup as a protest after the Stonewall riots which took place in June 1969 after a police raid at the Stonewall Inn, a gay bar in Greenwich Village, New York.

Pride not only shares the important history of the LGBTQI+ community’s fight for equal rights, but also looks to celebrates those who identify as lesbian, gay, bisexual, transgender, and questioning individuals and the impact that they have – we LOVE it!

If you want to find out more or find out about events taking place near you, then read our blog on the UK Pride Festival Events 2022: Everything You Need To Know.

Despite many pride events taking place during the International Pride Month in July, Liverpool Pride takes place annually in the first weekend in August every year for a very important reason which is in memory of the death of Michael Causer.

Michael was a young gay man who was tragically murdered in Liverpool in 2008. Each year Pride takes place closest to the anniversary of his death, on August 2nd. Find out more about Michael’s story or donate to the Michael Causer Foundation which supports young LGBTQI+ individuals in Merseyside, and challenges injustice and prejudice.

Unfortunately, the fight is far from over in terms of LGBTQI+ rights so it’s as important as ever to still shine a light on issues that the community face not only in Liverpool but across the UK and the world.

We are so proud of those from HFS who attended this weekend’s Pride and protested and celebrated alongside so many others! 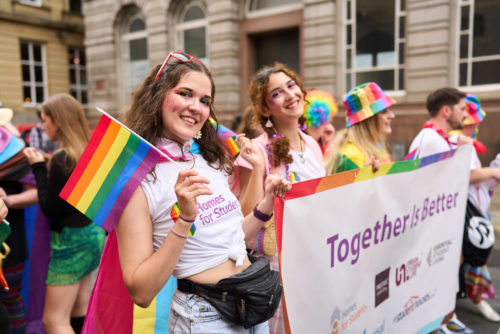 Liverpool’s annual Pride festival is delivered by the LCR Pride Foundation and this year the events theme for 2022 was ‘Come Together’.

The theme was chosen to not only show that the LGBTQI+ community were returning to in-person events and coming together again, but also to highlight the need to have a close-knit community spirit due to the ongoing impacts on the community.

Last year, there were a significant rise of incidents of homophobic and transphobic hate crime within the Liverpool City Region. So, Pride now more than ever is a time to protest against this treatment towards the LGBTQI+ community.

The event itself looked like such a great time with the annual March with Pride parade starting the show off at St George’s Plateau and ending at the festival site at the Pier Head, on Liverpool’s Waterfront.

We try to promote a diverse, inclusive and accepting environment across all of our properties and in our workplaces so that the LGBTQI+ community feel safe, secure and most of all, free to be themselves!

Which is why we are now part of The Safe Space Alliance with all our student accommodation properties being recognised as safe spaces so that members of the LGBTQI+ community can freely express themselves and be free from discrimination of any kind.

To find out more about what this means and why it’s important, have a read of our blog on Supporting The Safe Space Alliance: Our Collaboration.

At Homes for Students, we are keen to promote a culture of equality and diversity is which is why in June 2021 we set up ‘Together is Better’. This group brings together those looking to share their experiences and aims to ensure inclusivity within our properties and our workplaces!

Lee Sullivan, Co-Founder of Together Is Better, has said “Homes for Students is building a culture of true inclusion where everyone can feel like they can be themselves, build a career and fulfil their potential, regardless of beliefs, backgrounds, and abilities. This means that we try to put inclusion at the heart of all that we do. Together is Better is a key part of this process”.

Members of our HFS team, are also attending Birmingham Pride in September on Saturday, 24 September which is going to be fantastic. If any of our students are going, we hope you have the best time, and we’ll see you there!

If you’re going to any Pride events this summer, have an amazing time and don’t forget to tag us in any pictures you get @_homesforstudents.