The Suffragette movement over 100 years ago was pivotal in helping women to get the vote in the UK.

It was the first time that feminism as a concept became widely recognised and understood by the wider population in the country.

You may not know though that much earlier than the Suffragette movement was a writer, a philosopher, and advocate for equal educational rights and opportunities for women – a woman who was the inspiration for the Suffragettes and all that came after that – Newcastle’s Mary Astell.

Her reputation as England’s first feminist comes from her impassioned plea for there to be the establishment of an all-female college in England. This was an idea that she first put forward publicly in her 1694 work Serious Proposal to the Ladies.

Mary Astell was born in Newcastle-upon-Tyne on the 12th November 1666, into a family that would be classed then as middle class.

Her father Peter was a coal company manager and a Conservative Royalist Anglican, who had strong religious views that were to have a strong influence on the life and work of his daughter.

Although she gained no formal education (her father died when she was 12 years old, and all the family finances were given to educating her brother, as the sole remaining male in the family), Mary was taught informally by her uncle, who was affiliated with a Cambridge-based philosophical school. 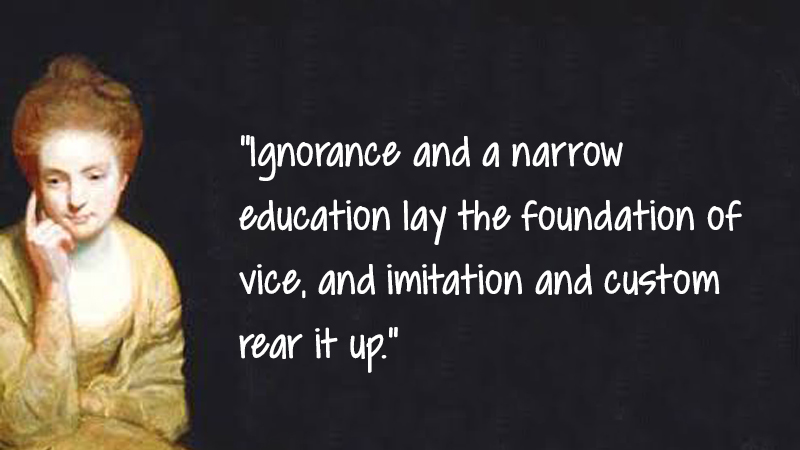 At the age of 22, Mary lost her mother and aunt and moved to London. Living in Chelsea, she became friends with influential women in literary circles, and it was here that she began to develop ideas that would become a staple of her reputation. Making friends with women such as Judith Drake, Lady Mary Worley Montagu, and Lady Mary Chudleigh would help Mary soak up new perspectives and ideas, as would meeting William Sancroft, the Archbishop of Canterbury.

It was these links that she formed in Chelsea that would help Mary Astell not only develop her feminist ideas, but also help her to publish them. The Archbishop of Canterbury provided financial support and would provide the contacts with publishers.

Mary promoted the idea that women were as rational as men, and deserved the right to the same level of education. There were many feminist publications that she put out, including

She was also involved in a number of other publications of the time, including:

It was no surprise that along with the support that Astell found from many prominent men of the era, she would also find some opposition, including from Daniel Defoe, John Locke, and John Norris, who all wrote about the disadvantages and impracticalities of the theories that Astell put forward. She would reason with philosophy rather than using historical examples however, which gained her respect as this had not been seen before her. “If all men are born free, how is it that women are born slaves?..”

A Serious Proposal was the work where Astell spoke directly to women and encouraged them to study and to improve knowledge in order to become better Christians, better wives, and better mothers. It was here where the idea of an all-women’s college was first put forward publicly. The idea was that it would prevent the external influences of a patriarchal society that was all-pervasive. The idea was never put into practice though, as it was deemed too Catholic and too impractical.

Some Reflections Upon Marriage was where Astell attempted to persuade society of the worth of women. She discussed how a wife should be perceived as the equal of her husband, and that it would be the only way to ensure a fortunate and happy marriage. She also believed that women should think of themselves as more than just the property of their husbands. One of the quotes seen most often within feminist thought comes from this publication: “If all men are born free, how is it that women are born slaves? As they must be if being subjected to the inconstant, unknown, arbitrary Will of Men, be the perfect Condition of Slavery”.

Mary would retire in 1709, founding a charity-based Anglican school for daughters of pensioners in Chelsea Hospital – where she would devise the entire curriculum.

She died in 1731, a few months after a mastectomy to remove cancer in her right breast. In her last few days she requested to be alone with God.

“Ignorance and a narrow education lay the foundation of vice, and imitation and custom rear it up.”

Although the specific views that Mary Astell held might not seem a little outdated when compared with modern-day feminism, they were extremely radical for the time.

She was the person who first gave voice to the need for women to gain equality of education provisions, and discussion did begin on the lack of equality women faced in all areas of life as a direct consequence of her work.

Although the Suffragette movement was so long after Astell’s life, it would be interesting to know how much longer it might have taken for the movement to take hold in the successful way it did, without the earlier groundwork of feminist pioneers such as Mary Astell. Her use of philosophy in her arguments also opened up a completely new framework for feminist views to be discussed within. Her work inspired other women to take up the fight for equality, a fight that still goes on to this day.

The immediate legacy of Mary Astell can be seen in the years from her death right up until the Suffragist movement in the late 19th century.

The writer Harriett McIlquham was certainly inspired by her. In the 1890s and again in the 1980s there was a revival of academic interest in Astell as a feminist, even though it is widely recognised that Astell would have seen herself as a philosopher and metaphysician than a political reformer and would not have expected to become a pioneer of feminism.

We can see how important Mary Astell is as an icon of Newcastle to this very day.

As an inspiration for educational equality for women, her name has been used in the Mary Astell Academy in the city. The Academy provides education to boys and girls, basing the project on values where young people are provided with a fresh start and an opportunity to return to mainstream education. Where this is not possible, the Academy provides an educational opportunity that mirrors mainstream education. It operates across three sites in the city, and is a stimulating environment where education is cared about and staff are committed to providing equal opportunities to all children, much in the way Mary Astell would have wanted.