HFS Info Hub: What Are Gender Pronouns and Why Do They Matter?

We quite regularly refer to people using gender pronouns, whether we realise it or not.

These assumptions about the gender of another person are often based on their name or appearance, but this can be incorrect.

It is important to think about the meaning behind gender pronouns and how we can think and act differently in the future to be as inclusive as possible at all times.

We can’t alienate or harm another person based on an incorrect assumption about their identity. which is why in this blog we’re going to explore the importance of gender pronouns.

Why does it matter to use the correct gender pronouns? 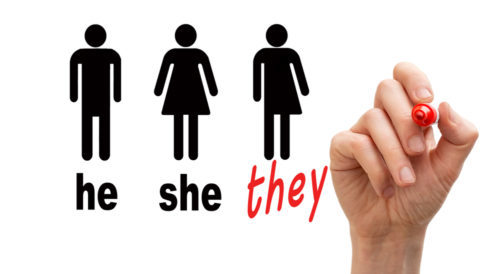 It all boils down to respect. We all want to be treated with respect and we all have an idea of how we see ourselves and how we want to be perceived by others in our lives and the outside world.

Think about how it can be offensive to some people to make up a cruel nickname and call them by that name against their will.

For some people, it can be offensive or harassing to, in the first place, guess at what their pronoun is, and/or to refer to them with the wrong pronoun moving forward.

If you are just being careless, or you are not fully aware of how to speak about pronouns yet, you may only use the ‘traditional’ gender pronouns of ‘he’ or ‘she’ based on a person’s name and/or appearance.

It could imply that intersex, nonbinary, transgender, and non-conforming people either do not exist or should not exist.

To you, it might not make a big difference whether you use the correct pronouns or not when talking to a new person, how are you to know for sure, right?

For a non-binary or transgender person, it really does, and should, matter.

By misgendering a person who has likely struggled with how they view their physical body and gender identity you could cause serious harm psychologically.

It can cause depression, anxiety, a feeling of disrespect, and alienation.

How to use personal pronouns

By sharing pronouns, a person is directly telling the world how they would like to be referred to in the singular third person, or when they are being referred to in a conversation between two different people.

A singular pronoun in the first person, or talking about yourself, or second person, referring to a person when talking to them, do not vary.

Singular first-person pronouns – “I am a cook, the recipe is mine, I created it myself. Do you like me and my cooking?”

Singular second-person pronouns – “You are a cook, the recipe is yours, you created them yourself. I like you and your cooking.”

Singular third-person pronouns – There are a few different sets of pronouns that could be chosen by a person. They/them is acceptable prior to you knowing what a new person chooses for their pronouns.

It is important to remember though that no matter what set of pronouns a person goes by, this is not an indication of what gender they are.

A person could be cisgender or transgender and share the pronouns they go by.

You can share your pronouns whether you are a woman or a man, or neither, and it does not necessarily show the world what gender you are.

Why do some people use the pronouns ‘he/they’ or ‘she/they’? 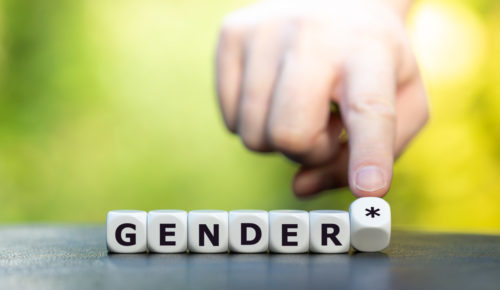 This is where it comes down to being polite, respectful, and to always listen to the other person as to how they wish to be referred.

For some people, they may use both pronouns and find it completely acceptable for you to alternate between the two when you are referring to them.

It all depends on each individual and how they feel about their own pronouns.

Some people use one pronoun in a certain context and the other in a completely different setting or situation, due to being comfortable or feeling safe in a certain space.

The best approach if you are confused by this when talking to someone, is to listen to how that person refers to themselves and to take a cue from them.

How do I make sure I am using the correct pronouns?

A good starting point is to think about your own pronouns, so you might say that your pronouns are ‘he/him’ or ‘she/her’ for example.

Once you have a grasp over your own gender pronouns and how you would like to be addressed it will become a lot more natural to build this into how you introduce yourself to new people in your life and how you approach other people with respect that they deserve.

For example, when introducing yourself to new people, you might choose to say “my name is (blank) I use him pronouns’.

At first, it might feel uncomfortable and different, but over time it just becomes another part of our regular everyday lives.

It is important to have this as your default setting as it can make a huge difference to relationships with other people, even if they are only casual relationships,

Because as with any topic or part of life, the more accurate the information you have at your disposal, the better you can act within that setting.

It is impossible to ever know for sure how another person feels or sees themselves in terms of identity just by looking at them.

Therefore, it is important to make sure and to ask other people what pronouns they use when meeting for the first time. By sharing pronouns you’ll get to know that person on a better level than if you never ask.

Using gender pronouns in university, the workplace, and social media 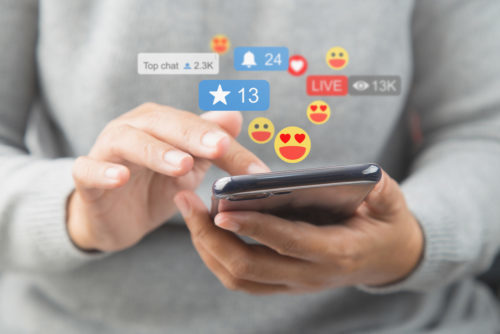 One way that we are seeing a shift towards the proper use of pronouns in everyday life is where people are beginning to post their pronouns on their social media accounts, at the bottom of emails, and whenever they first introduce themselves in meetings, seminars, and other new places and settings.

It sets out the stall immediately, leaves no room for guessing, and informs every person that needs to know, how to interact with each other in the most accurate and respectful way.

To become an ally of the LGBT+ community, it is an incredibly easy thing for you to do to change your email signatures and social media bios to include your pronouns.

It shows the world that you respect the gender identity and pronoun choices of every person, whilst making it crystal clear how you, yourself, would like to be addressed. It is only a small gesture in practice, but it makes a world of difference.

We have seen in many different universities and workplace settings over recent times a push towards normalising this aspect of life.

With some Student Unions’ handing out badges to students with pronoun-related phrases, such as “My Pronouns are They/Them” in order to create a safe environment that is inclusive and welcoming to all, whilst starting the conversation about gender and pronouns in a wider setting.

Sharing pronouns in these settings is not just helpful for those people with names that are gender-ambiguous or less common.

As we see a continuation of migration and a mixing of cultures throughout the world, it is understandable that there are some names that are unfamiliar to every person, regardless of their background and ethnicity.

Sharing pronouns is a quick and effective way to save embarrassment for every person.

Should I expect every person to share their pronouns in public?

If you are a cisgender person, it is generally an easy, fast, and safe solution to recognise your pronouns and to share them with the world.

It is important to understand however, that this might not always be the case for some people, especially if they are in an unfamiliar location or setting.

Always be mindful of this when sharing your pronouns and never make an assumption, based on how a person looks or sounds.

What should I do if I make a mistake and misgender someone? 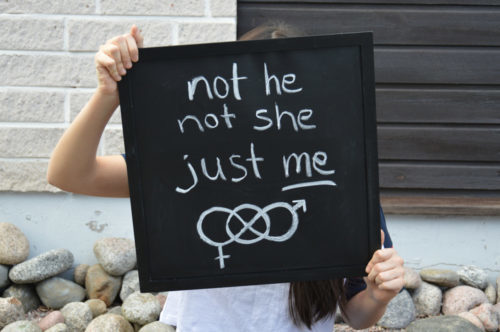 It is understandable that at first you might feel uncomfortable and wary about making a mistake when talking openly about gender pronouns and making sure that you address a person in the correct manner that they wish to be referred to.

If you make a mistake, don’t hide from it and compound the issue. Always apologise straight away and move on from the situation.

If you are unsure, be polite and ask a person how they would like to be referred to, correct yourself and learn from it.

With a simple gesture of making a quick apology, recognising your error, and moving on, you are showing that person that you care and that you respect them.

What should I do if I see a different name on a person’s ID than how they introduce themselves?

For many transgender people, it can be assumed by others that as soon as they come out as transgender that they are able to change their name legally right away, or that within every setting they can now be known by their chosen name.

In reality, there are complex issues to undertake in order to change your name, for any reason.

What this means, is that for some transgender people, they may not have the ability to go under their authentic name on a passport, driving license or another form of ID, at least not right away.

If you are in a position where you are dealing with checking IDs for any reason and the name does not match what you’ve known that person as, be mindful and sure to use their authentic name when talking to them, despite what the ID might say.

What about gender-neutral language? 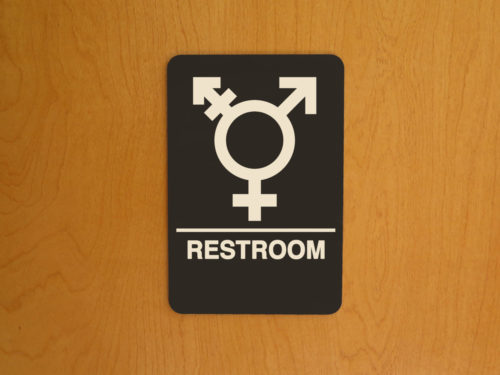 We’ve focused on pronouns in this article, but it is also worth being aware of gender-neutral, nonbinary titles that some people may use.

This includes Mx, which is pronounced ‘mix’ instead of Ms or Mr. In terms of gender-neutral language, in many cases where a group of people are being welcomed a simple change of language to “welcome friends and guests” instead of “ladies and gentlemen” can have a positive impact on everyone without too much effort.

What should I do if I am not sure of a person’s pronouns?

If you are not sure about what pronouns a person uses, or if you do not yet know for sure if that person goes by another set or sets of pronouns, it is important to be as respectful as possible.

In these situations, we would always advise that the pronouns ‘they/them’ are the acceptable choice to make.

By understanding more about pronouns and why they matter, we can start to treat every person in the way that they deserve.

There are many trans and gender-nonconforming people in the world, and we all deserve to be recognised in the way that we see ourselves, not how the rest of the world sees us and places us inside a box, not of our own making.

Being careful and respectful of another person’s choices when it comes to a correct personal pronoun is important.

It can be offensive to guess at someone’s pronouns, and if you do make a mistake, always be quick to admit the fault, ask how that person would like to be referred to, and go from there.

It doesn’t have to be a big deal every time, but it is important to shift the way we think about pronouns to make sure that every person is treated with respect.

Are you enjoying our info hub? Click here to read our blog on the advantages and disadvantages of social media and get talking.