It’s not all Robin Hood and lace…

Nottingham is a city brimming with history, made famous through a legendary outlaw, and an ancient craft. But it’s also a university city with a growing reputation for great student life.

Think of Nottingham and images of Robin Hood, clad in Lincoln Green, bow in hand laughing heartily with his band of Merry Men instantly spring to mind. Dig a little deeper into your memory and you’ll almost certainly know the city was once the lace making capital of the world. Then there’s Nottingham’s two football teams, Raleigh bicycles, controversial novelist DH Lawrence and dashing poet Lord Byron. So, a mountain of history, but that’s not the whole story.

Today, Nottingham is still producing people at the top of their professions. Musician Jake Bugg, fashion icon Paul Smith, and Gavin & Stacey actor Mathew Horne, all hail from the city.

An outlaw and the oldest pub

You can’t avoid the legend of Robin Hood around Nottingham. From the famous statue at Nottingham Castle to guided tours hoping to capture the spirit of the outlaw of Sherwood Forest, there is a vast array of activities available for anyone interested in the character and his story.

However, Nottingham’s history goes much further than Robin Hood, and it’s not all instantly visible. Lurking under the city lies a network of around 400 caves hewn from the sandstone upon which the city sits. Tours allow you to explore the City of Caves, but be warned it’s a strenuous journey through the labyrinth.

The cave network is tunnelled under Castle Rock, a vast sandstone mound upon which sits Nottingham Castle, though what you can see today dates from 1875 and is more museum than stronghold, since none of the structures dating back to the first Norman ‘castle’ in 1067 have survived the ravages of time.

For those who like a tipple with their history lesson, a pub claiming to be the oldest in the country nestles against Castle Rock’s flanks. The Ye Olde Trip to Jerusalem is said to date from 1189, and provides thirsty visitors with ales, food and a living history lesson. Word has it that one of the pub’s chimneys houses a secret entrance to the City of Caves, though that and its claim to be the oldest pub in the country have not been proved beyond doubt…yet. 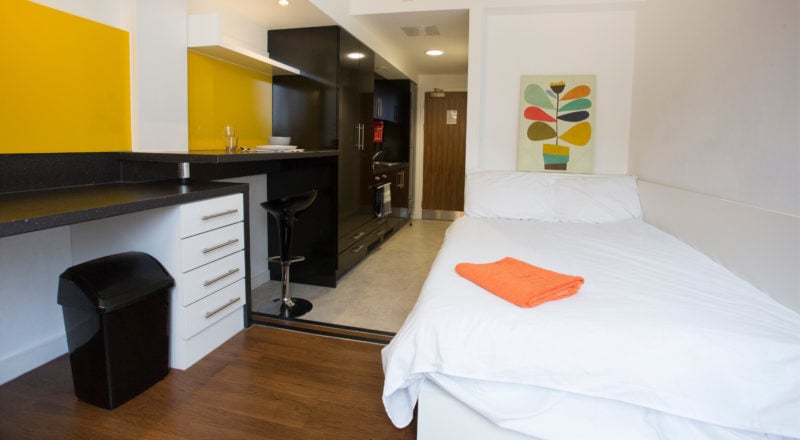 Any city with more than one university will provoke rivalry between students at the different seats of learning. Nottingham is no different. Those at the University of Nottingham will doubtless claim their campuses and facilities are superior to those of their neighbours at Nottingham Trent, and vice-versa. But the good natured verbal sparring only adds to the fun to be had while studying in the city.

Nottingham’s student community has an eclectic range of nightlife to enjoy. Rock City and the Rescue Rooms provide the live music, bars and volume, while Coco Tang serves up the cocktails and glamour, and on Mondays a student night with heavily discounted drinks.

But it’s Ocean, the 100% students-only nightclub dubbed the ‘Big O’, which is at the heart of student life after dark. A mixture of cheesy pop and a lack of pretentiousness saw it voted Nottingham students’ favourite night out by student publication Impact Magazine. The club has two official university affiliated nights – Wednesday is Nottingham Trent’s ‘Official Clubs & Societies Night’, while Friday sees the University of Nottingham’s ‘Official Friday Night’. No matter what the event, the Big O is usually part of it.

The centre of things

Your experience of student life, wherever you choose to study, is usually dependent on where you live. Comfortable and sociable accommodation at the centre of the city’s action will doubtless give you the best chance of being part of something special.

For Nottingham, this means Bowman House, which offers a great city centre location, clean, contemporary styling, and social spaces to gather with friends for a chat, meet up before a night out, or just to chill out and relax… and not forgetting a quiet space to study.

Student life is a hectic whirlwind of lectures, study time, partying, socialising, days out, and sightseeing, so being close to your campus is one of the most important factors in choosing your accommodation – who wants a long journey to lectures after a big night out? That’s what makes somewhere like Bowman House great – it’s a stone’s throw from campuses for both universities. Its location on Talbot Street also puts you close to the Big O on Greyfriar Gate, Rock City also on Talbot Street, the Rescue Rooms off Goldsmith Street, and Coco Tang on Bridlesmith Gate. There are also a number of restaurants, cafes and shops nearby.

Your time at university should be special, some would say the best time of your life. It’s where you meet life-long friends, form the basis of a career, and have experiences which stay with you forever. Life at university in Nottingham ticks all those boxes, and our student accommodation in Nottingham at Bowman House provides the best base from where to make the most of your experience in the city.

The Student Guide To Black Friday 2022