The Story Behind Liverpool's Superlambanana

Hey, Liverpool Students! Have you ever wondered what that bright yellow sculpture is that stands outside the Liverpool John Moores University library?

If you came to the conclusion that it looked like a cross between a lamb and a banana, you hit the nail on the head. At 17ft tall and weighing in at eight tonnes, Superlambanana has become a cult favourite in a city that has always embraced the artistic, flamboyant and downright quirky. 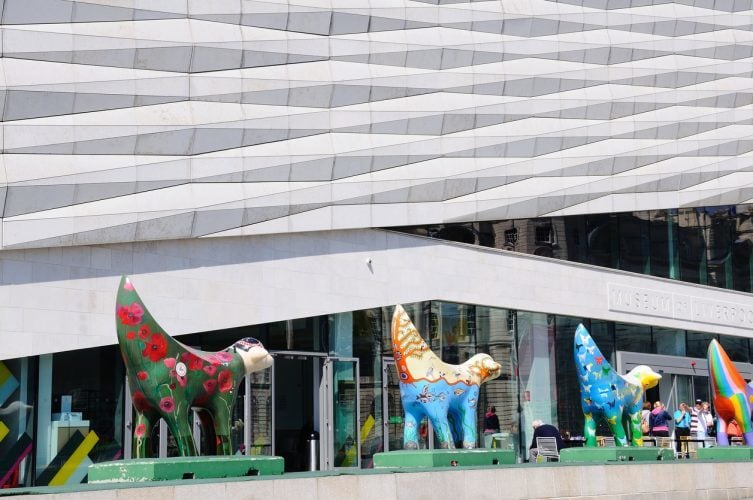 The Artists Behind The Sculpture

Local artists Ray Stokes, Tommy Reason, Andy Small and Julian Taylor took Taro Chiezo’s original four-inch design and produced a full-size replica for the ArtTransPennine Exhibition way back in 1998. They saw it as both a reflection on the danger of genetic engineering and a nod to Liverpool docks, where bananas and sheep were regular cargos.

Chiezo, a Japanese artist who was based in the USA, had visited Liverpool and described his creation as a vision of the future of 90s Liverpool.

Using a wire-mesh frame supporting a fibreglass and concrete shell, the four men who evolved Chiezo’s idea built the version we see today at a cost of £35,000.

Also Read: 10 Things To Do In Liverpool For Free

The eye-catching piece of work was unveiled at the reopening of Liverpool’s Tate Gallery and, once the ArtTransPennine Exhibition drew to a close, Liverpool Architecture & Design Trust assumed responsibility for it.

Since bursting onto the scene, Superlambanana has embarked on a tour of the city. First, it made the Strand, near the Liver Building, its home, before spending time in Williamson Square, Spike Island and Wapping, near the Albert Dock. Its current residence, outside the university library, has turned many a student’s head!

Memorably, as part of the European Capital of Culture celebrations in 2008, 125 miniature replicas were dotted around Merseyside. The two-metre high sculptures were developed in partnership between the Liverpool Culture Company and Wild in Art, and each one was sponsored by local businesses.

They remained on display for 10 weeks of summer before being auctioned off for the Lord Mayor’s charities. More than £500,000 was generated for good causes, with one mini-Superlambanana fetching a whopping £25,000! Comedian John Bishop was among the list of buyers.

Two years later, eight new two-metre high replicas of Superlambanana, nicknamed ‘Eight for 08’, were commissioned, and are still delighting the city’s visitors to this day. It even got a new lick of paint in 2016!

Liverpool shows no sign of losing its well-earned reputation for being a leading player in the creative world.