Who doesn’t love a juicy burger?

Over the last few years there has been an explosion of American BBQ culture in Liverpool, and you’ll find a plethora of burger joints, diners, and exquisite takes on the classic burger in town.

So if you’re living in any of our student accommodation Liverpool properties you’ll be delighted to know that whether you want a double cheeseburger with American cheese or a mouth-melting patty smothered in various sauces or you prefer tasty vegetarian and vegan options, Liverpool is the place to be for a tasty burger.

It’s been hard work tasting all of these so you don’t have to (you really should though), but here we’ve managed to rank the top 15 burgers in Liverpool from good to greatest:

15. The Bastion (Inside The Shankly Hotel, Victoria Street)

This might not be the best place if you’re not a Liverpool fan (plenty of Bill Shankly and LFC memorabilia on the walls) but The Famous Shankly Burger is well worth the trip.

A prime steak burger with a topping of sweet-cured streaky bacon inside a pretzel bun. It is a bastion of taste.

The Basic Chick is always a good shout, just to experience the simple flavours and brilliant taste to a Yard & Coop burger, but if you’re after something a little more adventurous the Massive Cock MK IV is the burger that continues to evolve and get bigger, with a double stacked buttermilk chicken breast and thigh, cheese sauce, chilli mayo, hash browns, BBQ pulled chicken, and we’re probably missing loads out here. It has to be seen to be believed!

You might be surprised to read Crust’s name on this list, especially as they have recently won national recognition and awards for the quality of pizza on offer, but the burgers on their menu are truly outstanding.

Using a pizza dough bun, Crust keep things simple with their burgers and it is rewarding as a result. Choose from Chicken, Beef, or Veggie.

A welcoming, trendy environment, where you can sample the delights of Lebanese street food.

The menu at Bakchich is fresh, and good value, with plenty of vegetarian options. They also do some delicious burgers, including the Veggie burger (halloumi steak burger filled with hummus, tomato, and falafel), and the Lamb Kofta burger.

“..whether you want a double cheeseburger with American cheese or a mouth-melting patty smothered in various sauces…Liverpool is the place to be for a tasty burger.”

Juicy patties, melt-in-the-mouth fillings, and massive portions are the name of the game here, as well as a bit of a kick to the flavours.

Frost is a small establishment with graffiti wall art and a ‘hipster’, industrial feel to it, located in the busy Wood Street area of the city centre, and it offers up four different types of vegan burger.

Choose from Beef Free Chicken Free, Fish Free, or Falafel and indulge in a completely meat and dairy-free burger experience like no other. It’s been known to convert even the meatiest of meat lovers.

At night the Shipping Forecast is a lively venue, with plenty of club nights and a live music venue in the basement. During the days and evenings though they also do a serving of fine food.

The 2-4-1 offers on a Tuesday is a great time to go, and we’d recommend the Katsu Chicken Burger or the Big Cow (beef brisket topping).

Simple, homemade cooking at its finest, What’s Cooking is the longest-serving restaurant in the beautiful Albert Dock, with its burgers a staple since the very beginning.

The Scooby Snack is a particular favourite, combining a double beef burger with double cheese, pineapple slices, and a cajunaisse sauce, along with a side of cheesy fries.

A chicken joint like no other in the city, Patterson’s does a fantastic range of chicken burgers, including the Salt ‘n’ Pepa (chicken breast, chip shop curry sauce, fried onions, peppers, and salt ‘n’ pepa seasoning).

This is also the place to go for a food challenge, with the Quadruple Bi-Pass burger a statement of intent (and too many ingredients to type out here!). 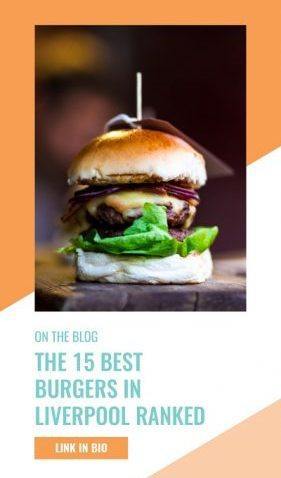 Hidden away in a basement bar on Hope Street this American-BBQ haven serves up some of the best burgers in the city, alongside some absolutely sensational bites.

The burgers are gigantic in nature, overflowing with flavour, and even include Chupa Chups speared into the burgers to hold them together. It really is full of items you’d want as your last meal (try the lasagne bites as a side).

5. Down the Hatch (Duke Street)

Vegan junk food is the name of the game down in this basement diner on Duke Street.

It is a cosy environment where you can snack on halloumi fries and onion rings, but also indulge in some ultra-tasty plant-based junk food, including the Zinger burger and the Captain Jacks (which is a BBQ pulled jack-fruit burger with homemade slaw.

Down the Hatch also features in our article on the 5 best places to eat in Liverpool city centre.

Also Read: What to do in Liverpool for free

Baltic Burgertown is the name of the menu at the Baltic Social and it is an apt name. You’ll find some of the best burgers in Liverpool here, in a simple and understated form.

The chips are thick and fluffy too, and worth a side order even if you are there for something other than a burger (mad to even suggest that we know!).

The Philly Cheese Steak and Bacon Double Cheese are highlights.

If you feel like dislocating your jaw to even be able to fit in all of the tasty burger in front of you, Almost Famous is definitely the place to be.

There is a wide choice of burgers on offer here, with loads of flavour, sauces, and different meats crammed into each bun to make it an absolute taste sensation.

The Triple Nom and River Phoenix are particular fan favourites. Might not be the best place to take someone you’re trying to impress, as you’re bound to get sauce all down your chin and top!

The American-style restaurant on Bold Street has become an institution over the course of the 2010s, and there are a range of big American classics, including the Pastrami Burger, and the Big Boy (which is three stacked patties, Swiss and Jack cheese, bacon, a hash brown, onion rings, and pickles.

Not for the faint hearted. Delicious sides such as Hush Puppies and burnt ends are also a must.

A hidden gem on a side street off Hope Street, Free State Kitchen serves up American classics in a simple form, and also has a great range of beers.

Try the simple classic American Cheeseburger, or if you’re after something a bit more adventurous the French Onion burger is to die for. They also have a great beer garden out the back, for those summer months.

8 Best Places to Get Pizza In Liverpool

Best Breakfasts In Liverpool & Where To Find Them | [UPDATED 2022]