What is in Common with Sandé & the Moon

What do musician Emeli Sande, romantic poet Lord Byron, footballing legend Denis Law and a crater on the Moon have in common?

The answer to this ultimate of pub quiz questions (and who would have guessed), is Aberdeen.

Want to know why? Read on …

Students moving to Aberdeen this September will doubtless have uncovered the fact that the Granite City’s wealth is built on the oil industry and that the Queen likes to get away from it all up the road at Balmoral, but that’s only part of the story. Behind Aberdeen’s glinting stone buildings lies a world of scientific discovery, famous musicians, thousands of years of history, and, let’s not forget, a great place to be a student.

Are they really from Aberdeen?

The list of famous faces to emerge from the Granite City is at best eclectic and, some would say, downright strange.

Multi award-winning former Eurythmics and solo musician Annie Lennox was born and grew up in Aberdeen before embarking on her groundbreaking career as a singer, political activist and philanthropist. The city also produced another award-winning singer-songwriter in Emeli Sande, who moved to nearby Alford when she was four. Before she hit the big time, the ‘Read All About It’ singer performed at The Lemon Tree venue in the city, and last year kicked off her acclaimed nationwide tour with a homecoming gig at the Aberdeen Exhibition and Conference Centre.

Staying with the arts, it may come as a surprise that the quintessentially English poet Lord Byron  (1788-1824) has a connection with the Granite City. The romantic wordsmith was raised in Aberdeen from the age of two until he was 10 due to the fact his mother was the heiress of the Gight estate in Aberdeenshire. Though he didn’t return to the city after inheriting the Barony of Byron of Rochdale, the poet referred to his Scottish roots in one of his most famous works, Don Juan, which includes the line, “But I am half a Scot by birth…”

Aberdeen’s more acclaimed former residents also include sports stars. Denis Law, who formed a formidable strike force with George Best and Bobby Charlton for Manchester United in the club’s heydays of the 60s and 70s, hails from the city. Manchester’s footballing connection with Aberdeen continues with Sir Alex Ferguson, who enjoyed a successful eight years from 1978-1986 as manager at Aberdeen FC before his move to Manchester Utd secured his place in football history.

With 52 golf clubs across Aberdeenshire, it should come as no surprise that a world class golfer would emerge from the region. Paul Lawrie, Open Champion in 1999, is one of Europe’s top golfers and runs the Paul Lawrie Golf Centre just outside the city.

Aberdonians have pushed the boundaries of scientific discovery. In 1869, with photography still in its infancy, astronomer Sir David Gill (1843-1914) took a picture of the moon, and in 1882 produced the first successful photograph of a comet. The Gill Crater on the Moon was named after the Aberdonian who discovered it.

In medicine, the treatment of polio was advanced in 1933 when Aberdeen doctor Robert Henderson designed the UK’s first negative pressure ventilator, also known as an ‘iron lung’, which was used to save the life of a local 10-year-old boy suffering from the debilitating disease.

Aberdonian inventor Robert Davidson (1804-1894), who built the first known electric locomotive in 1837, studied at the city’s Marischal College, and went on to be a chemist and successful entrepreneur in the city.

More recently, scientists working at the University of Aberdeen developed the world’s first underwater holographic camera, which can take three-dimensional pictures and facilitates the study of marine environments.

Aberdeen’s history is littered with firsts. Established in 1136, the Aberdeen Harbour Board is Britain’s oldest business, while the Shore Porters Society of Aberdeen, founded in 1498 and still going strong today, it is the world’s oldest documented transport company.

The city has also seen more medieval coin hoards discovered than anywhere else in Britain, and did you know that the self-sealing envelope was invented in Aberdeen?

The world’s fastest sailing ship, the Thermopylae was built in 1868 by Walter Hood & Company in Aberdeen. The 212 foot clipper beat its more illustrious rival, the Cutty Sark, by seven days in a race from Shanghai to London in 1872, and set a record of 63 days to reach Melbourne, Australia from London – a record for a sailing ship which still stands today.

The city itself has produced some of the most impressive feats of engineering. The city’s main thoroughfare and shopping area, Union Street, was constructed in the early 19th Century and is named after the Acts of Union in 1800 which created the the United Kingdom of Great Britain and Ireland. The massive building project produced a street almost one mile long and required the levelling of the area around St Catherine’s Hill and the building of arched bridges to carry the road across Putachieside. Needless to say, a project of this magnitude almost bankrupted the city, though Union Street has become one of Europe’s most impressive thoroughfares.

No mention of Aberdeen would be complete without reference to granite – the rock that has shaped and defined the city. Much of the granite used to build Aberdeen, and indeed many other granite structures across the UK, has come from Rubislaw Quarry, which, at 480 feet deep, was once the largest man-made hole in Europe.

Of the many granite structures adorning Aberdeen, Marischal College is perhaps the most impressive. It’s the second largest granite building in the world – only El Escorial Palace in Madrid is larger. Today the 80 foot high structure is home to Aberdeen City Council. However, Union Bridge in the centre of Aberdeen is the largest single-span granite arch in the world.

It’s not only the impressive structures around Aberdeen which boast Aberdonian granite. Waterloo Bridge and the Terraces of the Houses of Parliament were constructed using granite from Aberdeen, and 640,000 cubic feet of Aberdeen granite went into the construction of the Forth Rail Bridge.

On the surface Aberdeen seems defined by the oil industry’s wealth over the past three decades, but look a little deeper and you’ll discover a vibrant city with a rich history, a great place to live as a student. 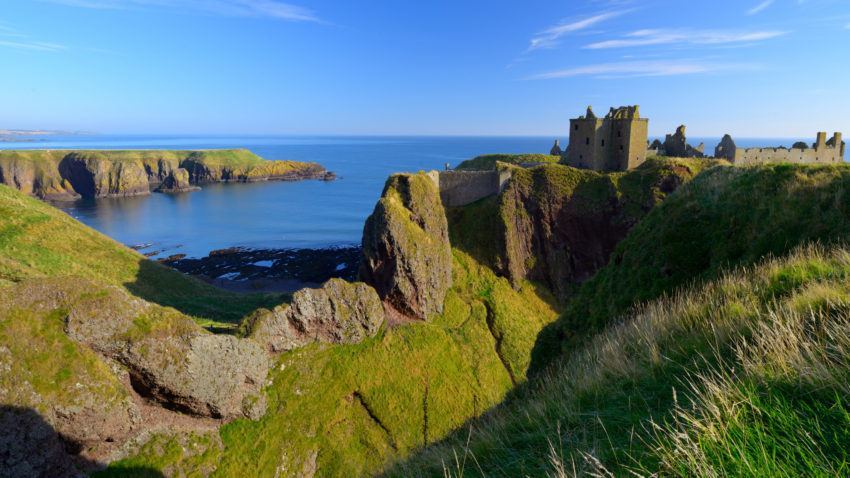 The 12 Best Places To Eat Out in Aberdeen