The walled Roman city of York is a hugely popular student town with both UK and international students. Famed for its rich historical heritage dating back 2,000 years, it is a vibrant place which seamlessly blends its history with modern living including plenty of bars, nightclubs, old pubs and a lot of tasty places to eat.


Our student accommodation York places you in the heart of the city and has been designed with the modern student in mind and comes with a choice of spacious studios and house share living. No matter what you choose, you’ll be living in super comfortable student houses and rooms equipped with plenty of storage, single and double beds, great study areas, amenities and social spaces, that ensure you make new friends easily.

The University of York is widely regarded as one of the UK’s most prestigious universities. More than 300 years since its first petition the university was finally opened with 216 undergraduates welcomed in its first year. It has prospered and now admits over 14,000 students each year. It has been widely recognised as a world-class university which strives to achieve excellence for all, having obtained a position in the Top 50 of the Times Higher Education World University Rankings in 2019. 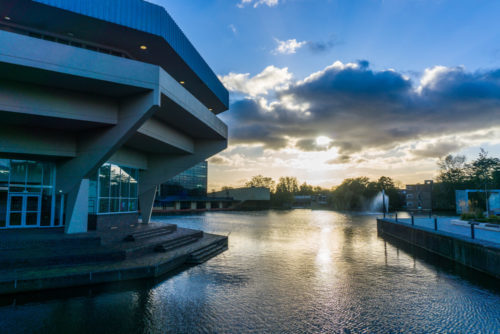 It is the Alma-mater for fifteen members of parliament, five members of the House of Lords and even author Anthony Horowitz who is famed for his creation of the Alex Rider novel series.

The university’s future goals also include providing a home for some of the best research in the world and in recent years they’ve seen a 35% growth on their research income. It also provides opportunities for online degrees for added flexibility to those who have to tailor study around a hectic personal life. They also offer 300 courses for professional development on a diverse range of topics.

But life at this university is not just about studying, it’s also about community and how the student lifestyle can provide sociable skills that will become invaluable for your future. There are over 200 student societies to choose from, such as academic groups like astronomy and Shakespeare to more light-hearted groups like Murder Mystery and Quidditchm and the best thing is that in Homes for Students we offer student halls very close to the main points of entertainment!

The second of our two main universities is York St John University, very close to Homes for Students student accommodation. 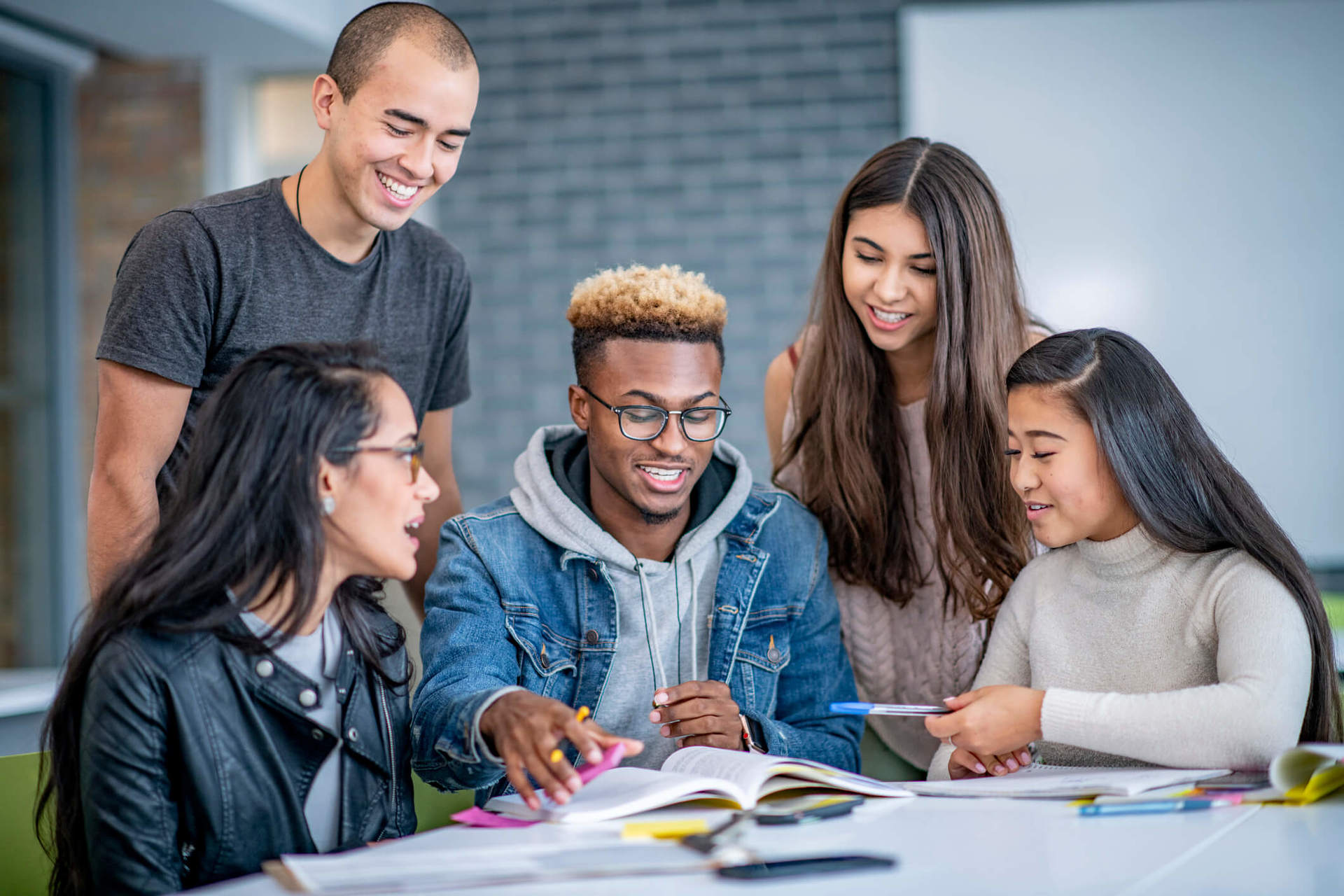 York St John University remained at York college status from its construction in 1841 until 2006, when it finally gained university status. Originally created for men only, a second college was created in 1846 for women but consequently relocated to Ripon in 1862. It wasn’t until 1974, both colleges merged and began working under the University of Leeds status in 1990 before finally receiving the right to award its own degrees in 2006.

York St John has fast become a popular choice for studying, with 97% of students succeeding in progressing further study or work six months after graduation.

This city’s food scene is buzzing, with a whole host of delicious eateries guaranteed to suit all personal tastes. Just a short walk or bus ride from your York student accommodation, these restaurants are well worth visiting. 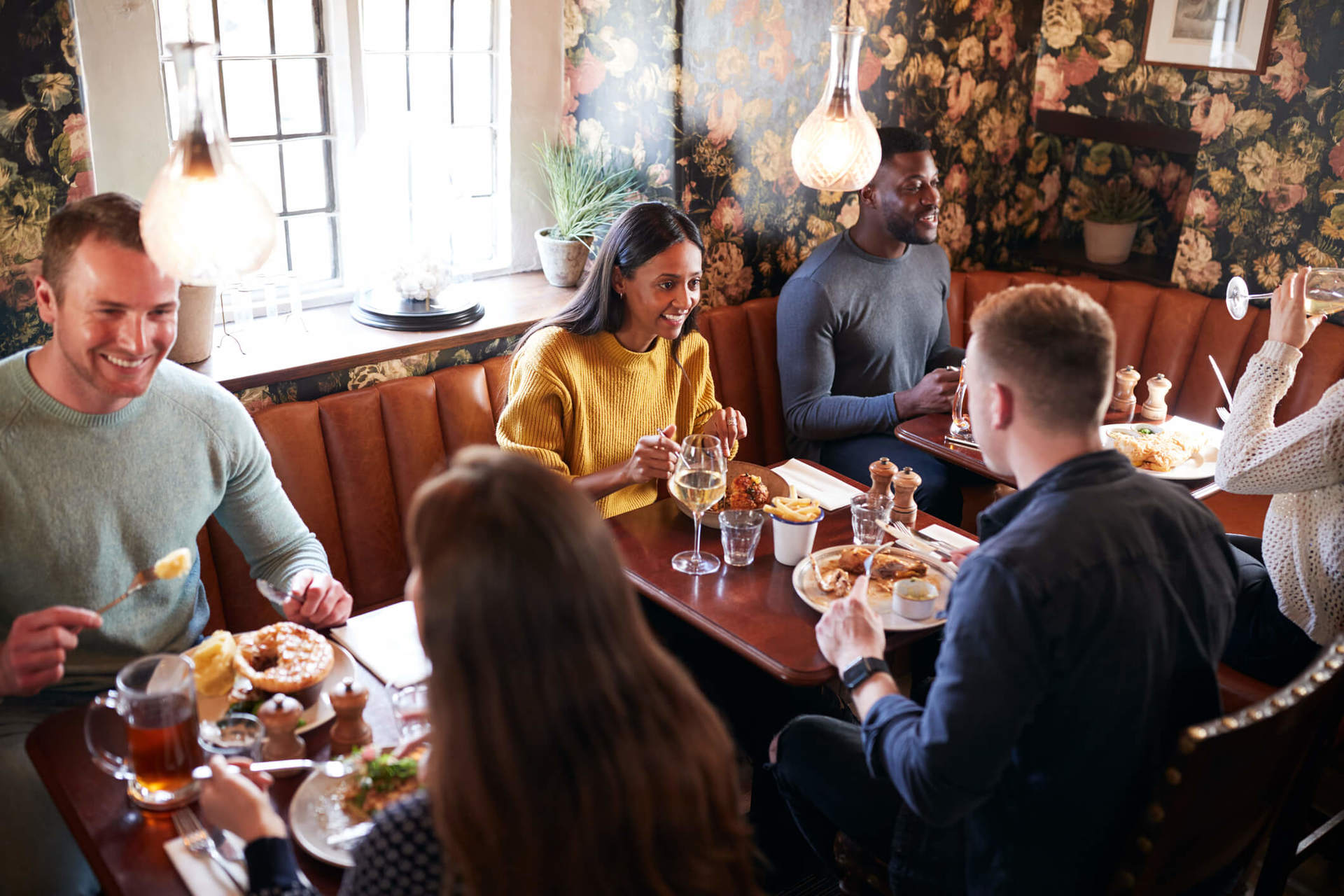 If you’re a fan of South Indian cuisine, visit Coconut Lagoon, considered to be York’s number one Indian restaurant, or venture towards Shambles Kitchen where you can enjoy a delicious home cooked meals for under £10.

Another top restaurant is Revolution Bar, famed for their sharer platters with enough food to please the whole group. 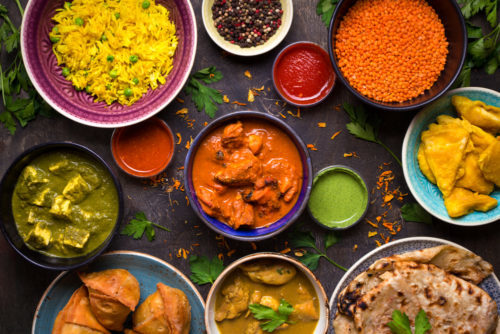 Biltmore, a family-owned business now over a decade old and resting inside a historic converted church offers a relaxed and calming atmosphere where you can enjoy the drink of your choice at the bar or gather with your pals in a comfy booth. Or visit to enjoy a delicious meal in the mezzanine garden overlooking the island bar.

Other notable places to explore when you’re looking for somewhere to eat, include French restaurant Rustique, Skosh which serve contemporary British cooking.31 Castlegate brings a range of eclectic and vibrant European dishes and don’t forget that all these places will be just a few minutes away from your student accommodation in York. 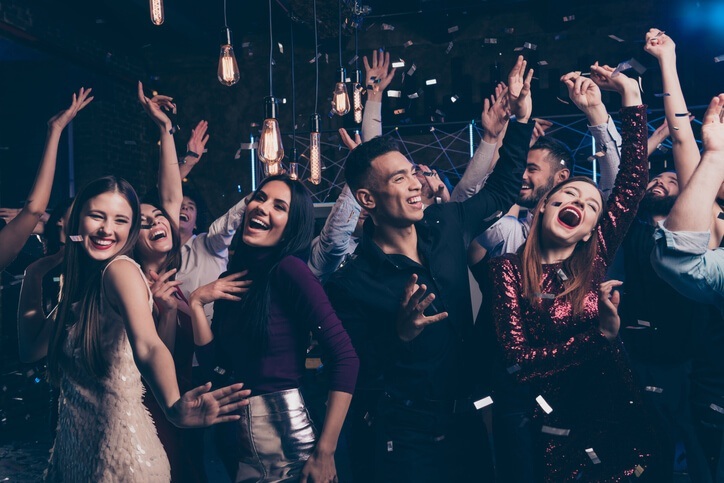 You’ll find top choices for a great night out all known for being hugely popular amongst students. There are plenty of excellent places to drink in York, but a typically favourite among the locals has to be Slug & Lettuce, gaining its reputation because of its quality food and drink.

On the on the other hand, how many clubs can say they’ve had band legends such as Coldplay, Bullet For My Valentine, You Me At Six and Stereophonics play at their venue since its creation in 1992? A visit to Fibbers could see you being one of the first to see the world’s newest sensation live before they become famous.

Just a few minutes walk for students staying in our student properties for the academic year, Kuda nightclub hosts the two universities weekly student night, Entourage, a sold-out event which features North Yorkshire’s finest DJs and attracts over 1,000 people every week. If you’re looking for a night, Tuesday nights at Kuda are considered to be the biggest and best. 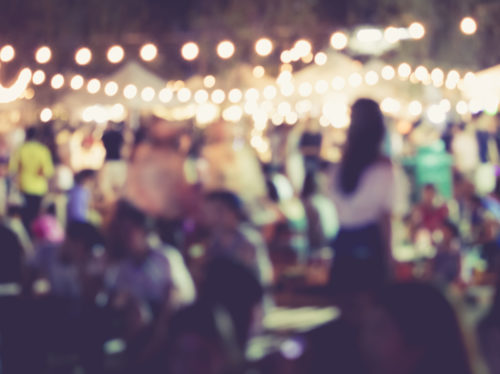 Another of the best nightclubs includes Popworld, home to the famous Ferris wheel 8-shot sharer! Labelling themselves the ‘cheese with style’, this nightclub only plays those cheesy pop songs we hate to love. Take a break from dancing the night away in one of their luxury booths! 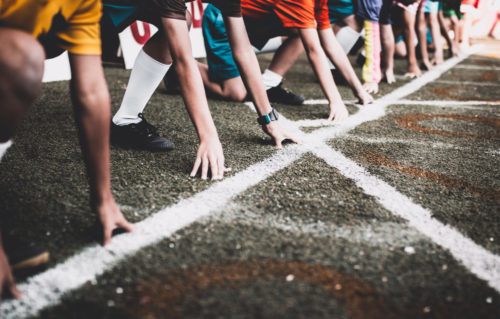 Located on Campus East, York Sport Village is the university’s easy access sport facility which provides an abundance of facilities to help you get the most out of your daily exercise. Get help from a personal trainer to reach your goals, enjoy pay as you go sessions for activities such as cycling and swimming, as well as over 90 classes a week. Alternatively, the Sports Centre is also campus-based, hosting football pitches, tennis courts and a gym with a fitness suite; everything you could need within walking distance of your York student accommodation.

Other events include the York Marathon hosted on campus each year which continues to attract over 18,000 people.

If you’re a sports enthusiast, the University of York presents a tradition to compete against Lancaster University since 1974 in the annual Roses Tournament. Organised by their respective Students’ Unions, the event is hosted during the summer alternating between each university for the venue. 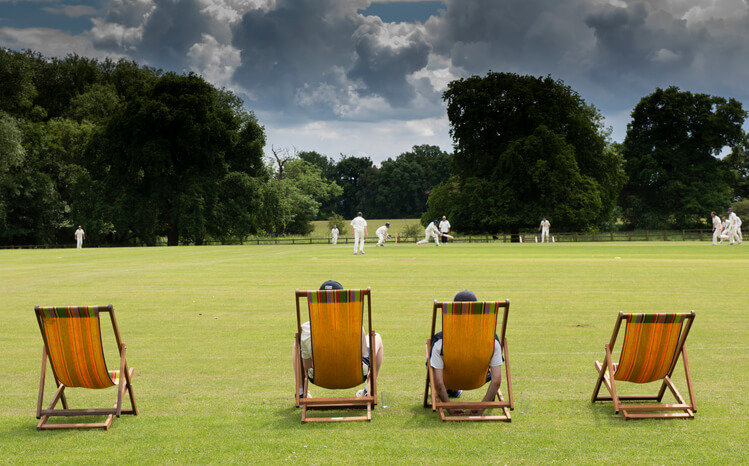 Classed as one of the world’s most famous streets, The Shambles is a narrow street with a lively history that dates back to the 13th century. Filled with an array of independent stores and colourful shop fronts, it is well-worth exploring this street.

Famous for its Roman roots, one of the top York shops pays homage to the city’s historical past, House of Trembling Madness. Fully furnished with medieval antiques and artefacts, you’ll be transported back to the middle ages upon entering. Explore their selection of craft beers, ranging from Belgian ales to more contemporary flavours, stocking over 1,000 total.

The Shop That Must Not Be Named 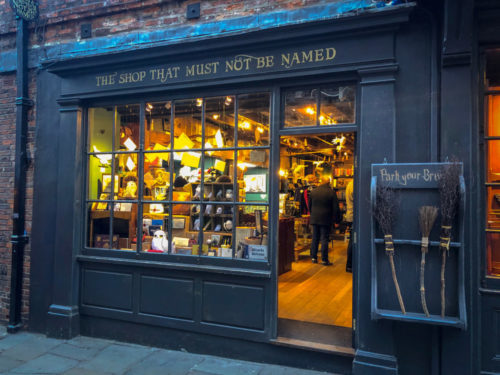 Considered to be one of the best shops in town, The Shop That Must Not Be Named has been cleverly named after the iconic series Harry Potter, taken from the famous line “he who should not be named” referring to the series villain Lord Voldemort. Students living at one of our student accommodation in York are within easy reach of this shop and once inside will be immediately transported into the world of Harry Potter. You can find this store on the famous York street, The Shambles, which was the filmmaker’s inspiration for Diagon Alley and continues to attract visitors from all over the world.

Looking for some designer boutiques? York Designer Outlet is located just 10 minutes away from the city centre and is the perfect place to spend an afternoon shopping at some of your favourite stores from back home. You’ll be sure to find everything you need with 120 stores and don’t forget to stop off at the spacious food court for refreshments and delicious food along the way.

Would you like to experience Christmas German-style? In the popular Christmas store Käthe Wohlfahrt, you will find a wealth of traditional German Christmas decorations to brighten up your student room space. Or uncover York’s hidden gem, Fossgate Books where you can scout for rare and second-hand books you never knew you could get your hands on.

Top York attractions must include a tour of the Gothic-style York Minster cathedral, circling the medieval walls and exploring one of its many historic museums. Are you curious about the From your York student accommodation, you’ll also easily be able to access the event of your choice, therefore we’ve narrowed it down to the top events circulating on an annual basis. 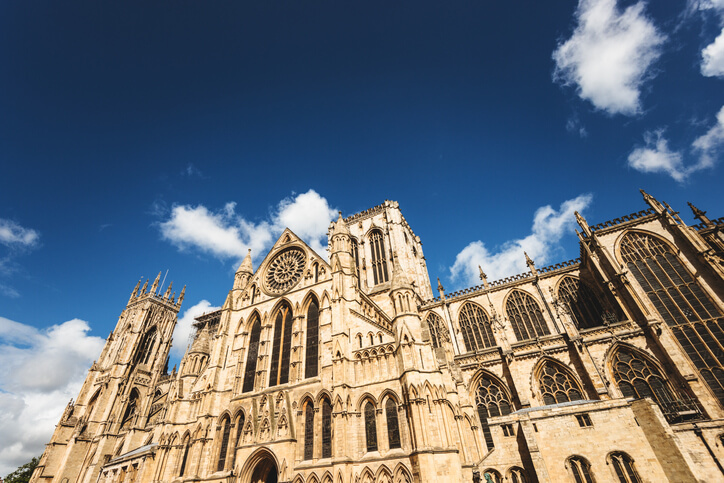 JORVIK Viking Festival set just a short walk from the city centre and after nearly 40 years, has become a city favourite, with a week’s worth of celebrations in the middle of February. Join an evening event at the Nine Realms Bar and drink like a Viking the night before the festivities begin. Get involved with a variety of events throughout the week such as the Viking Costume Competition, the Saga Storytelling, or compete in the Have-a-Go Sword Workshops. 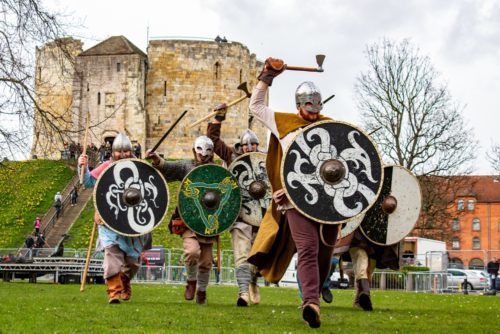 The annual York Literature Festival was first established in 2007. Previously hosting a range of talented authors such as Michael Palin, Lucy Worsley, Simon Armitage, Germaine Greer and much more you can enjoy listening in on talks with the authors, lectures and debates, a

s well as some exclusive storytelling pieces and workshops.

Are you a budding filmmaker? The Aesthetica Short Film Festival could be your next big break; submit a short film across any one of 11 categories. Or check out the York Early Musical Festival which celebrates over 500 years’ worth of musicians of the highest artistic standard.

The York Food and Drink Festival. it’s 10-day festival held at the end of September each year and visitors from all over the country. Looking to promote local food producers and independent retailers in York, this festival highlights the very best this city has to offer. There’s something for everyone to get involved with here that can make a fantastic day out for you and your friends.

Other notable York events include the York Chocolate Festival and York Christmas Festival where you can look forward to taking part and soaking up the city charm.

Despite being in COVID times the staff are friendly and have made me feel safe around the site and the room is great!
Matthew Wells, Resident
ABODE, York

I really want to commend the staff here at Abode. They have clearly made a real effort to make us feel welcome and supported.
Jake Bennett, Resident
ABODE, York

When I arrived, I was greeted with warm smiles from the staff and team which still persist to this day.
Oskar Watson, Resident
ABODE, York

8 Delicious Italian Restaurants In York You Need To Try