The festival of Chinese New Year has a history dating back 3,800 years and is known as Lunar New Year, which falls on the first day of the second new moon, just after the winter solstice. The date of Chinese New Year changes from year to year as it is based on the lunar calendar: it is chosen according to the moon’s orbit around the earth.

All Around The World 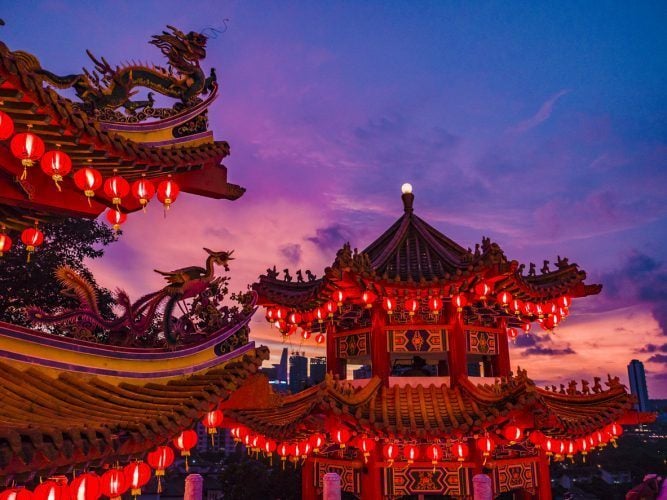 Chinese New Year is not only celebrated in China but by many other Asian regions such as Malaysia, Korea, Japan and Vietnam. Many families travel very long distances, as it is tradition and good luck for everyone to be together for the New Year. The New Year is the most important holiday for Chinese people: a lot of preparation goes into the festival and there are many customs that the Chinese people go through before New Year’s Day, such as cleaning and purchasing, making greeting cards, eating dumplings, using firecrackers and visiting friends and relatives.

Food is a very important part of the New Year, various traditional foods are made. Every dish has a different meaning, fish is eaten for good luck and it symbolises surplus for the forthcoming year. Dumplings are an important traditional dish in China, they are made like ingots symbolising money. The Chinese say the more dumplings you eat, the more money you will receive in the future. Sweet rice balls are also eaten as a symbol of family and togetherness. Longevity noodles are one of the main traditional dishes for the New Year, their length and preparation are a symbol of the person consuming life. Several generations will get together around the table to enjoy each other’s company and a great feast.

Amongst other Chinese New Year traditions is the thorough cleaning of one’s home to rid the resident of any lingering bad luck. The streets of China would be decorated with amazing hanging lanterns, couplets, and paper cuttings pasted on doors, as this is a tradition to cast away evil and bring good prosperity and fortune to the family’s household. There would also be an overwhelming sound and smell of firecrackers used to chase bad spirits. After the firecrackers are done families would prepare for the first meal of the year, which is said to be as important as the reunion dinner for most Chinese.

The End of the Festival

The fifteenth day is the end of the festival activities and all things are back to normal after that day. On this day, people will go to enjoy different shapes of lanterns and guess lantern riddles.

The Chinese New Year is a very symbolic time not only just for the Chinese but for the world. As it is a significant time for people to reflect, relax, enjoy time with family members and prepare for the future. The festival is surrounded by amazing food, beautiful colours and most of all it has held its ancient tradition and customs.

The COMPLETE Student Guide to the 2022 British Grand Prix

UK Pride Festival Events 2022: Everything you need to know