All You Need to Know About Moving to Manchester for University

Moving to Manchester as a student is really exciting!

Manchester is a vibrant student city, one of the best in the UK, and as you start your journey as a student, you’ll want to know all there is to know about this amazing city.

The birthplace of the industrial revolution, it has always been a hub of innovation, and change, and had an air of rebellion.

There is plenty to see and do in this northern powerhouse city, with a few different universities, lively nightlife, arts and culture coming out of your ears, incredible food, and some top-notch sport to enjoy.

For students moving to Manchester, this guide is for you!

What Are The Universities In Manchester? 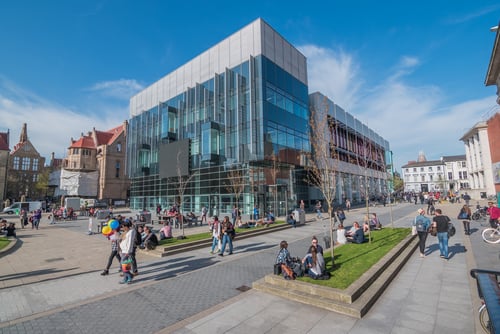 There are a few different universities and colleges that you could be moving to Manchester for as a student.

Most students will attend Manchester Metropolitan or the University of Manchester, with a combined total of over 75,000 students between the two. It makes Manchester an interesting, lively student city that always has plenty on offer to explore.

The University of Manchester is world-renowned, one of the top research institutions in the UK, with a huge library of over 4.2 million printed books and manuscripts inside one of only five National Research libraries.

Manchester Metropolitan is a modern university, with an ideal of opening up higher education to anyone with a passion for learning, no matter their background. The Students’ Union at Manchester Met is one of the largest in the country, offering advice and guidance.

What Is The Cost Of Living In Manchester? 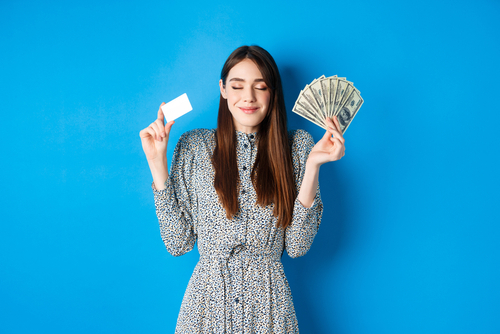 Manchester has a pretty affordable cost of living for such a big city with plenty going on. It is a desirable place to go for students looking to make the most out of their living budget.

This can be seen in how local businesses, transport services and the nightlife in Manchester compete for the approval of students.

You can always find a good promotion for a bar or club, discounts for restaurants and transportation costs in Manchester are reasonable. 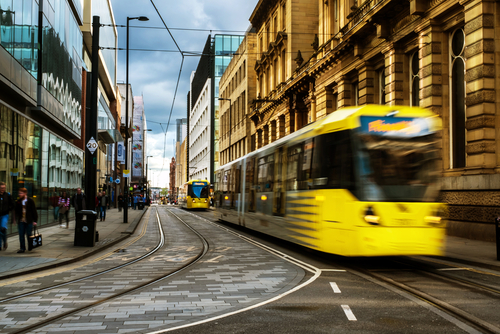 It is a simple city to get around, even if you are moving to Manchester as a student and are unfamiliar with it.

The universities are accessible on foot, and there are simple and safe cycle lanes. Public transport is numerous and has student discounts and passes on offer.

The tram services are well-stocked, catering for those travelling to and from the outskirts of the city, whilst there are also free bus journeys between the three major railway stations in the city centre (Manchester Piccadilly, Manchester Victoria, and Manchester Oxford Road).

For those looking to use taxis, there are plenty, you can hail one off the street or join a taxi rank, with most city centre journeys costing no more than £5. Uber has made things much easier with the car-riding app used as a popular way to travel around Manchester.

Is Manchester A Foodie City? 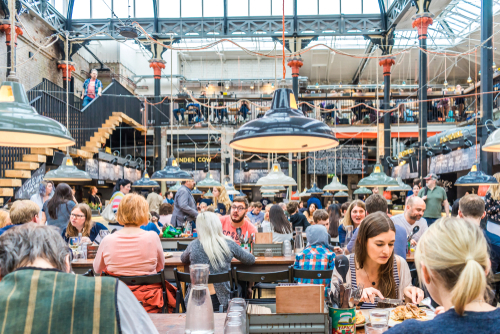 The food scene in Manchester is up there with some of the best around. In fact, you’ll struggle to find a better selection of restaurants, street food, cafés and other eateries anywhere else outside of London.

There is everything from high-end cuisine to the biggest chains you know and love, and everything in between. The beauty of Manchester is that there are very distinct areas of the city that you can explore, each with plenty of its own food outlets.

The Northern Quarter is full of independents, quirky cafés, bars and street food, whilst a wander down the Curry Mile will give you everything you could ever ask for if you like some spice and a visit to a curry house at the end of a night out.

Some of our favourite places to eat in Manchester: 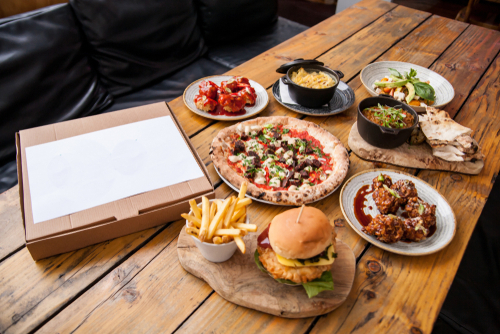 Melt-in-your-mouth grilled cheese goodness with sumptuous fillings and mountains of three-cheese-blend to top it all off!

Home to genuine Neapolitan pizza like nowhere else in the UK.

I am Pho – George Street

Home to Mowgli, Vapiano, Doner Haus, Cosy Club – a range of food to suit all tastes, in a beautifully ornate building in the centre of the city.

Serving up massive pizzas with all sorts of crazy toppings – the MacDaddy or the Wacko Jacko are two of the finest slices around.

You can certainly tickle those taste buds in Manchester without breaking the bank.

From brunch through to tea-time there is something for everyone’s tastes and you can legitimately eat a world-class meal from a different restaurant every night of the week, probably for a good few weeks!

Is There Good Student Nightlife In Manchester? 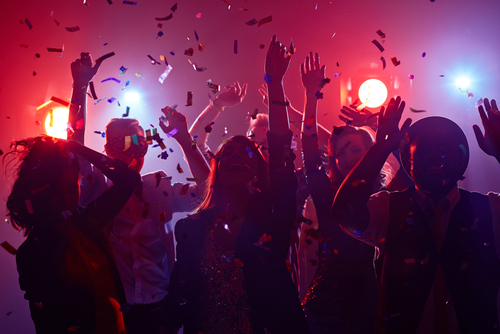 Those of you moving to Manchester for the nightlife will not be disappointed! The way the city centre is split into very distinct areas means that it is very easy for you to find your people and the night out you are looking for.

There genuinely is something for everyone on a night out in Manchester, from the great live music venues scattered throughout the city, to the vibrant clubs and bars of the Gay Village and the hipster joints of the Northern Quarter. You’ll find student nights and discounts wherever you turn.

Some Of Our Favourite Places To Go On A Night Out In Manchester: 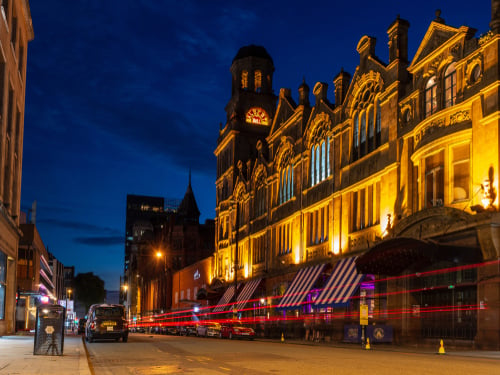 Special club nights that run throughout the year, with some of the biggest names in dance music coming through to entertain.

The pinnacle of the alternative scene for many in Manchester, it has intriguing wall art that makes for great group pictures, and a soundtrack of underground hits from 60s rock ‘n’ roll through to cheesy 80s pop.

Cocktails, drinks, DJ sets, and a stylish décor make for a great place to relax during the day and evening, before the party starts later in the night.

The Pink Room is a must-see, an unmissable chance for a photo-opp. It hosts student-friendly events, loads of gigs in the basement, art exhibitions and DJ sets, a staple in the arts community in Manchester.

Downstairs in an old Victorian toilet, this is a tiny, dark, and moody pub with plenty of character.

oIne of the quirkiest night’s out in Manchester and home to some amazing club nights, a venue that stays with you.

One of the most popular student nightspots, expect shots, cheap drinks and loads of different music, from your dancefloor classic to banging indie anthems!

A tiki delight, this cocktail bar has a great party atmosphere whenever you step inside. It has beach-themed drinks, live music and great DJs on every night, a tropical paradise over three floors.

Is There Plenty Of Sport In Manchester? 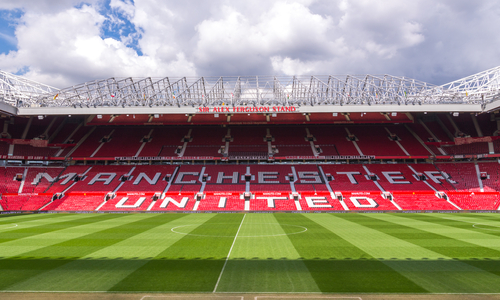 If you love sport, moving to Manchester is not going to be a problem for you.

a tale of two cities – The mighty Manchester United, one of the biggest clubs in the world, play their home games at Old Trafford, whilst the most successful team of the past decade, Manchester City play at the Etihad Stadium.

There is no love lost, but Manchester is proud to have two of the biggest football clubs in the world right here.

On the outskirts of Manchester this indoor snow centre has the largest indoor ski slope in the UK. The Snow Park is a lot of fun for skiing, sledging and other winter sports.

Manchester is home to the Manchester Storm in ice hockey, the Manchester Giants in basketball, and Lancashire County Cricket play matches at Old Trafford Cricket Ground.

There are many rugby league clubs in Greater Manchester and the North West of England (the Super League Grand Final is played in Manchester most seasons) and loads of lower league football clubs in the surrounding areas.

Sports facilities are fantastic in the city, whether you want to pursue a team sport such as rugby or football, take up tennis, swimming, running, or any other form of exercise.

Will I Enjoy Shopping In Manchester? 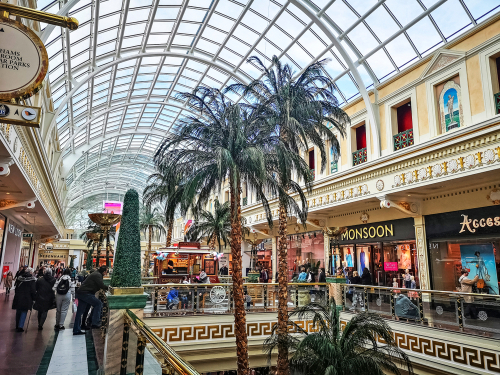 The answer is emphatically, yes! Manchester is an interesting city for shopping with all the high street big brand names that you would expect, but also loads and loads of independent stores, boutiques, antique shops, and the like.

All of your big brand needs are met at these locations, with over 240 retailers at the Arndale and some of the biggest names in retail at the Trafford Centre. You’ll find all your much-needed supplies here.

This is the luxury retail area of the city, with high-end jewellers and luxury designers. It might not be the best place for students on a budget, but it is always worth a wander if you love shopping, and it is a great place to buy some Christmas and birthday gifts for your loved ones.

For independent shops and vintage boutiques, the Northern Quarter is the one. It is the fashionable and artistic hub of the city and where you’ll find the artists and the musicians in town. From vintage clothing stores to arts and crafts, independent record stores and your day-to-day essentials from small, local businesses, there is plenty to admire here.

What About Arts And Culture In Manchester? 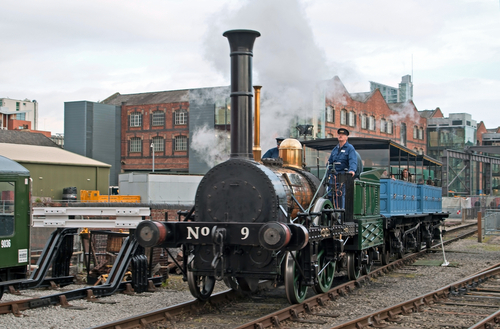 Much like everything else we’ve said here, if you are moving to Manchester, it is easy for you to find like-minded people who are interested in the same things as you are.

There is just so much going on, all the time.

For Museums And Galleries, See:

The Museum of Science and Industry – Liverpool Road

A look at the city’s involvement in the advancement of science and industry.

A history of the working class and democracy.

Range of artworks from classic to contemporary pieces.

Not too far away, this stunning theatre and gallery space is one of the most-visited cultural spaces in the country. 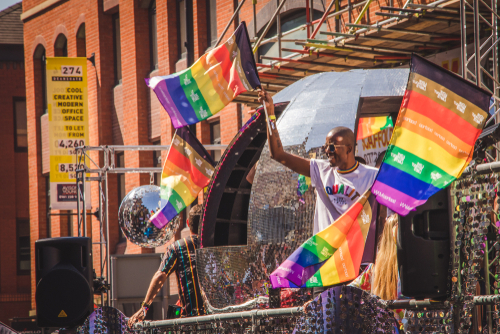 The longest-running LGBTQ+ festival in the UK takes place every August, with 10-days of celebrations and parties, candlelight vigils and live performances.

Several stages, big name artists and bands and a popular music event that runs every June.

In Albert Square every year the main hub of the Christmas Markets comes alive, with food and drink, festive lights, and plenty of cheer.

September and October are the time of year when stalls and samples from over 250 restaurants and eateries are on show to the public. Gastronomic delight!

As you can see, moving to Manchester as a student brings with it a whole host of opportunities. The universities and libraries are some of the best in the country, so you’ll have the foundation to study hard and get results. When it’s time to unwind, there’s plenty to see and do, with museums and galleries, tasty restaurants and food markets, nights out, nights in, and sporting activities to take in.

10 Items You Just Have To Add to Your University Checklist

How To Get A First Class Degree | Tips, Tricks and Hacks Here

How To Reduce and Manage Your Screen Time During University