Yes, we know exactly what you’re thinking, it IS that spooky time of the year again!

Halloween 2022 is going to be one of the biggest and best nights out of the year.

In need of some inspiration on what costumes to wear? Don’t worry, we’ve looked at allllll the possible trends to make you stand out from the crowd.

Keep on reading to find your Halloween costumes for 2022… 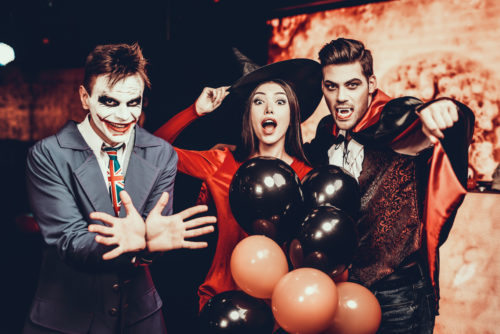 Last year saw Kim Kardashian-West opt for an iconic all-black outfit, whilst this year she managed to be even more legendary with her crystal-embellished dress last worn by Marilyn Monroe.

Although she did receive backlash for wearing the dress last worn by Monroe at President John F. Kennedy’s birthday fundraiser in 1962, it’s been said she didn’t damage the dress whatsoever, so we’re here for it!

Why not recreate the iconic met gala look for Halloween 2022?

You just need to grab a sparkly rhinestone dress and style your hair in a slick wet look, if you really want to go all out you could get a white fur jacket too.

For the last couple of months since the release of Stranger Things Season 4, Eddie Munson has become an absolute comfort character for many of us.

What better way to honour him than to dress up as him this Halloween!

If you haven’t heard of him then what are you playing at? Eddie Munson, portrayed by Joseph Quinn in the series is the leader of the The “Hellfire Club”, a Dungeons & Dragons-oriented group at Hawkins High.

You should for sure dress up as the beloved Eddie this October, if you can get your hands on a hellfire t-shirt!

Another Halloween costume trend you need to try now is Steve and Robin, the unlikely best friends from Stranger Things.

Their platonic friendship is goals, and we think you and your bestie should dress in the iocnic Scoops Ahoy costumes!

Or if you want to bring in season 4 vibes you could dress in their Family Video fits.

Since the release of Elvis, the biographical musical drama film by Baz Luhrmann, the King of Rock & Roll has been trending everywhere.

The biopic explores the life of the American music icon Elvis Presley (played by Austin Butler), from his childhood to becoming a rock and movie star.

Whilst dressing up as Elvis for Halloween isn’t a new phenomenon, it’s certainly going to pop off this year!

You could even dress up as Priscilla and have a matching couple outfit with your significant other.

Since the release of season 2 of the series, fans on TikTok have been loving Lexi’s costume choice, and we do too.

Why not dress up as the 80s icon with a brown afro wig and a shirt? It’s pretty simple and cheap to recreate!

You could even have a whole Euphoria themed party.

Cassie and Maddy from Euphoria are the ultimate fashionistas, despite their friendship taking a big hit in Season 2.

You and your bestie could whip out the glitter and dress in for their iconic Cheerleader outfit or stunt one of their gorgeous hallway outfits.

If you’ve got a few friends who are fans of the show, you each dress up and go as the whole friendship group!

Wednesday Addams from The Addams Family, will be a popular costumer choice for fans this Halloween.

With the highly anticipated release of the Netflix series Wednesday by Tim Burton.

Jump on the trend by dressing up as Christina Ricci’s Wednesday (although, in this series she’s not returning as her iconic character).

The best part is, its easy to recreate the iconic look yourself with a long sleeve black dress and put your hair in plaits, you can even get a black wig!

Despite coming out last year Squid Game is still ever popular, being Netflix’s most-watched show.

The Korean drama follows contestants who accept an invitation to compete in children’s games for a tempting prize, but there’s a dark twist.

Dressing up as characters from the hit TV show will be for sure an immensely popular choice again this Halloween.

You can dress up as the contestants in their green tracksuits or the guards in their red jumpsuits!

9. House of the Dragon

Lovers of the ‘Game of Thrones’ universe have been dressing up as their favourite characters for years whether its Jon Snow, Arya Stark or Daenerys Targaryen to name a few.

With the recent release of the spin-off series, House Of Dragon, which follows the story of the Targaryen civil war that took place about 200 years before events portrayed in GOT.

We’re sure that costumes related to the new series will be trending this Halloween!

Dress up as your fave whether its Prince Daemon Targaryen or Princess Rhaenyra Targaryen! All’s you need is a silver wig and some medieval looking clothes.

A post shared by House of the Dragon (@houseofthedragonhbo)

With the recently released Disney+ miniseries following the Jedi knight, Obi-Wan Kenobi and Darth Vader with Ewan McGregor and Hayden Christensen reprising their iconic roles, it’s a MUST for those looking for a party outfit for Halloween this year!

Dressing up as a Star Wars character is definitely not something new for 2022, but it’s still a costume idea that will leave a statement.

You could dress up as Obi-Wan, Darth Vader or Princess Leia, there’s no short for costumes online!

Top Gun: Maverick is one of the biggest films of the year, the action film is the sequel to the 1986 film Top Gun.

The film once again follows Pete Mitchell as one of the Navy’s top aviators.

This time, he’s training a detachment of graduates for a special assignment and Bradley “Rooster” Bradshaw, the son of deceased Nick “Goose” Bradshaw is in the class.

You could dress up like Maverick or Rooster in their Air Force fighter jet uniform’s this Halloween and look super cool for any uni parties.

All you need is a jumpsuit and some shades!

If you’re on TikTok, you’ll have heard or at least seen the buzz about Netflix’s new show – Outerbanks.

It’s a drama series about a teenager who enlists his three best friends to hunt for a legendary treasure linked to his father’s disappearance.

If you’re looking for a fun group costume or couples costume, this is defo one you might wanna look at.

Some of you can go as Pogues, and the others can go as Kooks…what’s not to love?

We don’t know about you, but we need to find out when season 3 is being released!

If you’re like us then you probs fell in LOOOVE with Emily In Paris and you’re desperate for the third season to be released.

When it comes to dressing up for Halloween, we think going as Emily (or any of the characters for that matter) would be super cute.

Obvs she’s a fashion designer, so this is your opportunity to go all out and unleash your inner creative side.

Okay so this is a trend we think is going to be huuuuge for this Halloween with this year’s release of the second series.

There’s no better feeling than switching on the TV and immersing yourself in the 1891 British regency drama.

For your Halloween costume this year, why not channel your inner Anthony or Kate and dress to impress? We bet you’ll be loving the heaps of compliments from your pals.

If you’re looking for a scary outfit to wear on Halloween night, then you have to think about investing in The Purge look.

There’s been so many Purge movies (and a TV show) that it’s definitely not an original idea, but it’s one that’s sure to stand out from the crowd.

What makes them so versatile is that the masks basically do the work for you, so even if its a last minute job, you’ll still be looking flyyyyyy.

And that’s a wrap, we hope you’ve enjoyed our selection of Halloween costumes 2022, with the trends we bet are going to be hits this year!

We can’t wait to see some of the outfit choices in our student accommodation properties!

If you’re interested in knowing the Autumn trends for 2022, why not check out our recent blog? We bet you’ll be inspired to revamp your seasonal wardrobe.

The Student Guide To Black Friday 2022

Christmas in Lancaster: 8 Festive Things Students Can Do

All The Simple Christmas Cocktails You Need To Try

A Very Merry Guide To Christmas In Canterbury 2022